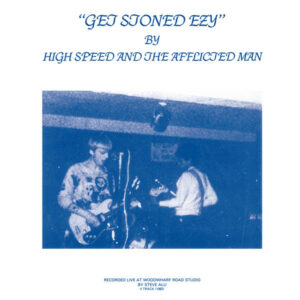 High Speed And The Afflicted Man / Get Stoned Ezy

In 1982, the mysterious Steve Hall, a self-proclaimed “hippie-punk” who had previously released a couple of D.I.Y basement-punk albums with his band Afflicted Man, recorded one of the most obscure, underrated and KILLER heavy-psych albums of all time. Credited to High Speed & Afflicted Man, “Get Stoned Ezy” consists of three long tracks of late 60s/early 70s influenced psychedelic hard-rock. A fuzz-wah assault of epic proportions in the style of other guitar-damage Gods like Human Instinct, Wicked Lady, Hendrix, High Rise, Sabbath, Stooges, etc, all played with a real acid-punk attitude. 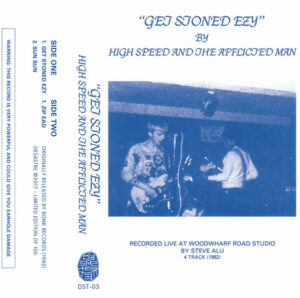 High Speed And The Afflicted Man / Get Stoned Ezy

This is the very first official cassette release since 1982. Limited edition, printed white tape, and visuals including the original artwork in a 4 panels tape cover J-card with rare pictures of Steve Hall.