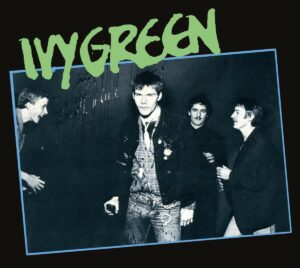 Simply the greatest (punk) album ever made in Holland.
Like the Ramones in America and the Sex Pistols in England, Ivy Green were The Netherlands’ first and foremost punk band, and arguably the best. Hailing from the small village of Hazerswoude, far away from the big city buzz, the four guys that started the band in 1975 could develop their musical style and skills in almost total seclusion. And yet their simple but charismatic rock & roll was raw and fast enough to propel them right into the vanguard of the fledgling punk rock movement. Their eponymous debut album stands as a bona fide punk classic. Released in 1978 on WEA’s short-lived Pogo label, it has long since been unavailable and became an extremely hard to find collector’s item. Now this stellar longplayer has been dynamically remastered from the original master tapes, including 2 bonus tracks pressed onto CD and packaged in a beautiful 6 page digipak featuring the original artwork and extensive liner notes by music journalist Swie Tio.