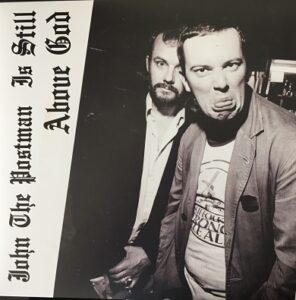 John The Postman / Is Still Above God

John The Postman was, hardly surprisingly, a postman. John and his friends were regulars at the first punk gigs in Manchester. It was at one such gig in April 1977 after a few too many drinks that John decided to invade the Buzzcocks stage, picked up a guitar and decided to terrorise the audience with his version of the rock standard Louie, Louie… This masterpiece of mayhem continues the madness and is released as a limited edition of just 300 copies. It is the perfect tribute. 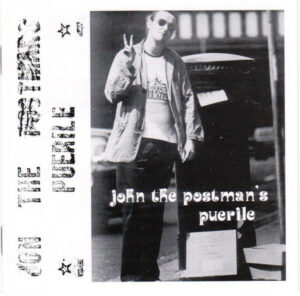 The 12 tracks here are a compilation of both rare albums from the man who would turn up uninvited to early punk gigs in Manchester and terrorise the audience by destroying rock classics in true DIY style.Regarded as a hero by Julian Cope, John Peel and Mark E. Smith (whose first apearance on record is on this disc), John was a real postie with the GPO in Manchester… HE WAS DESCRIBED AS “A COMMITTED AND OMNIPRESENT FIGURE ON THE PUNK AND POST-PUNK SCENE IN MANCHESTER”