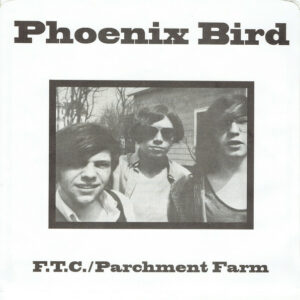 Phoenix Bird were a New Hampshire trio who formed in 1969, and cut these two songs to an acetate in 1970 or shortly thereafter, with the intention of releasing them as a single. That didn’t happen until four decades after the fact. Per the liner notes, PB had “hopes of being the next big power trio.” Had it been released on schedule, “F.T.C (Fuck the Cops)” would have beaten N.W.A. to the punch by a good twenty years; sonically, it sounds like the band was cutting it’s teeth on Cream. The B-side is ‘Parchment Farm,’ a rendition of the old-time prison standard that Blue Cheer turned inside-out for their 1968 opus, “Vincebus Eruptum.” With a great cover of Blue Cheer track! Released back in the 90s on the defunct American Sound label.