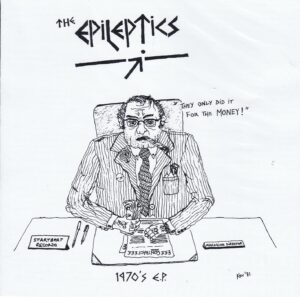 Formed in 1978 in Bishop Stortford the band decided to call themselves The Epileptics following a suggestion from one of their mothers.
In August 1978 Crass played in Bishop Stortford and a long lasting friendship was established.Complaints of ‘ill-conceited jocularity’ from The British Epilepsy Association resulted in a name change to Epi-x, then changed to The Licks under pressure from Stortbeat who in 1979 released the band’s debut single, much played by John Peel. The band changed their name back to The Epileptics, more releases followed, then in early 1980 the nucleus of The Epileptics re-emerged as Flux Of Pink Indians.