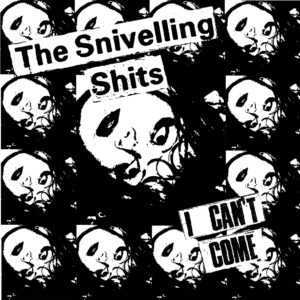 The Snivelling Shits – I Can’t Come

Brown vinyl issue of the anthology CD. This version of the LP (same as the CD & earlier picture disc versions) includes 4 extra tracks not found on the original anthology LP (FNARR LP 3). As anthologised in this archival colored-vinyl document, the band’s brief recording career (eight whole tracks, including the viciously irreverent “isgodaman?,” originally released on a Beggars Banquet compilation LP under the name Arthur Comics?) included incisive swipes at the Sex Pistols, John Cooper Clarke (“I Wanna Be Your Biro”) and the Velvet Underground. That’s history for you!