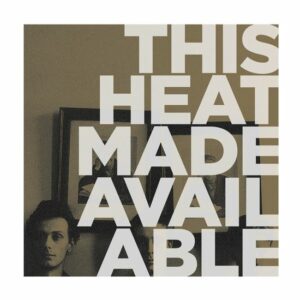 This Heat / Made Available

Formed in 1976 in Brixton, a multicultural, and – at the time – down-at-heel part of south London, This Heat were born into a music scene in rapid flux, first thanks to the punk explosion and then via new wave and its myriad offshoots into pop, rock and art-rock. But while many sought to apply punk attitude to chart-friendly sounds, This Heat were concocting some of the most experimental ideas ever committed to tape, taking influence from musique concrète, krautrock, the burgeoning industrial scene and even the dub reggae blasting out in their home borough.
Made Available collects This Heat’s two Peel Sessions, recorded for BBC Radio 1 in April and October of 1977 and features essential songs that would later appear on their debut album, This Heat(1979) and the follow-up, Deceit (1981), as well as electro-acoustic works unique to these sessions.