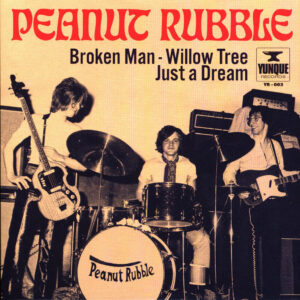 Peanut Rubble was a power trio from Buckinghamshire, a rural area a few miles northwest of London. This Radio Luxembourg Studios recordings were made back in 1968, being an early sample of british heavy music one year before Led Zeppelin released their first album.
They used to play in college/university circuit, airbases and youth clubs with 100w Marshall stacks, being too loud for some of those clubs. They supported bands such as Status Quo, The Pretty Things, Arthur Brown or Pink Floyd.
The single contains three remastered songs of pure loud heavy blues, with a smooth drum playing and a thick fuzzy sound, being now released for the first time. It includes an insert with the story of the band. 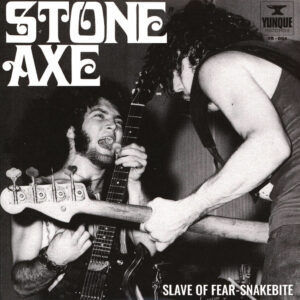 Stone Axe emerged from the ashes of Josefus in 1971. Jerry Ontiberoz, Pete Bailey, Ray Turner along with guitarist Mike Long formed the lineup that recorded probably which is the holy grail of 70s heavy rock/proto-metal singles.
Slave of Fear/Snakebite is the only recording they made in the band’s short live and this is the first ever reissue, which now includes a kickass cover art and insert with the story of the band plus lyrics and unpublished pictures. The tracks have been remastered, getting a clear sound but with all their power and heaviness. We also have tried to respect the original and iconic Rampart Street Records orange label. For fans of Josefus and obscure 70s proto-metal, this is history of USA and Texas hard rock, a totally must have.